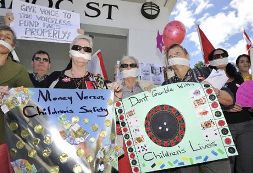 GAGGED: Child protection case workers in LIsmore, on strike for an hour to highlight the lack of staff and resources Photo: Mireille Merlet-Shaw

At midday, more than 30 officers walked out of the job on to Zadoc St and tied gags around their mouth in a silent protest against being banned from speaking to the media.

“That’s an awful lot of extra work that could be done to help children at risk.”

NSW Family and Community Services Minister Pru Goward visited the Lismore office late last year and after meeting with case workers, promised to fill the vacancies, but Mr Turner said nothing had happened since.

According to recent reports there are 270 vacancies throughout the state.

Mr Turner said only one in 10 children notified as at a risk of serious harm received a follow-up appointment from a case worker.

“They work with families to try and repair those families, to keep them together to have an ongoing healthy life.”

He warned the consequences of shortages would be “more severe” as time went on.

“Actions will continue if nothing changes,” he said.

Strikers said there was a feeling among staff that “nothing had changed” and the strikes would continue until there was some evidence of improvement.

Director General of the Department of Family and Community Services Michael Coutts-Trotter said the strikes were disappointing and counter-productive.

Mr Coutts-Trotter said as of August 13 there were 184 new appointments in the department.

He said it was a priority to “reduce the administrative work that gets in the way of caseworkers spending more time with more children and families”.